By iccawebmaster August 7, 2019 No Comments

A Home for Possibilities, Two houses for the new PS1

Public Space One is thrilled to announce the next era of its existence in Iowa City, with the purchase of two adjacent properties at 225 & 229 N. Gilbert St. in the Northside cultural district of Iowa City. These two new houses will be the location of programs such as The Iowa City Press Co-op and The Center for Afrofuturist Studies, in addition to housing a gallery/installation space, artists studios, and community workshops, and serving as the home base for PS1’s other projects and initiatives. The City Council approved the sale at the Aug 6th meeting and a crowdfunding campaign has already begun.

The City of Iowa City put out an RFP in Dec 2018, looking to save 225 & 229 N. Gilbert St through historic landmark designation. After a several month process, PS1 was awarded the opportunity for community nonprofit use of the spaces The City is contributing $58,000 towards the purchase and renovation of each house.

The artist-led, community-driven contemporary arts space, which was started above the Deadwood bar by UI students in 2002, has a long history of utilizing unwanted or under-whelming spaces and turning them into cultural hotspots for experimental, emerging, and other genre-bending art work and performance. Currently (and for the last 7 years) located in the Wesley Center, the organization grew from a small team of artists under the umbrella of the James Gang nonprofit to a nationally-presenting but community-rooted contemporary art organization including two major programs garnering significant local and national support: The Iowa City Press Co-op (ICPC) and The Center for Afrofuturist Studies (CAS), both of which will have expanded presence in the new location. 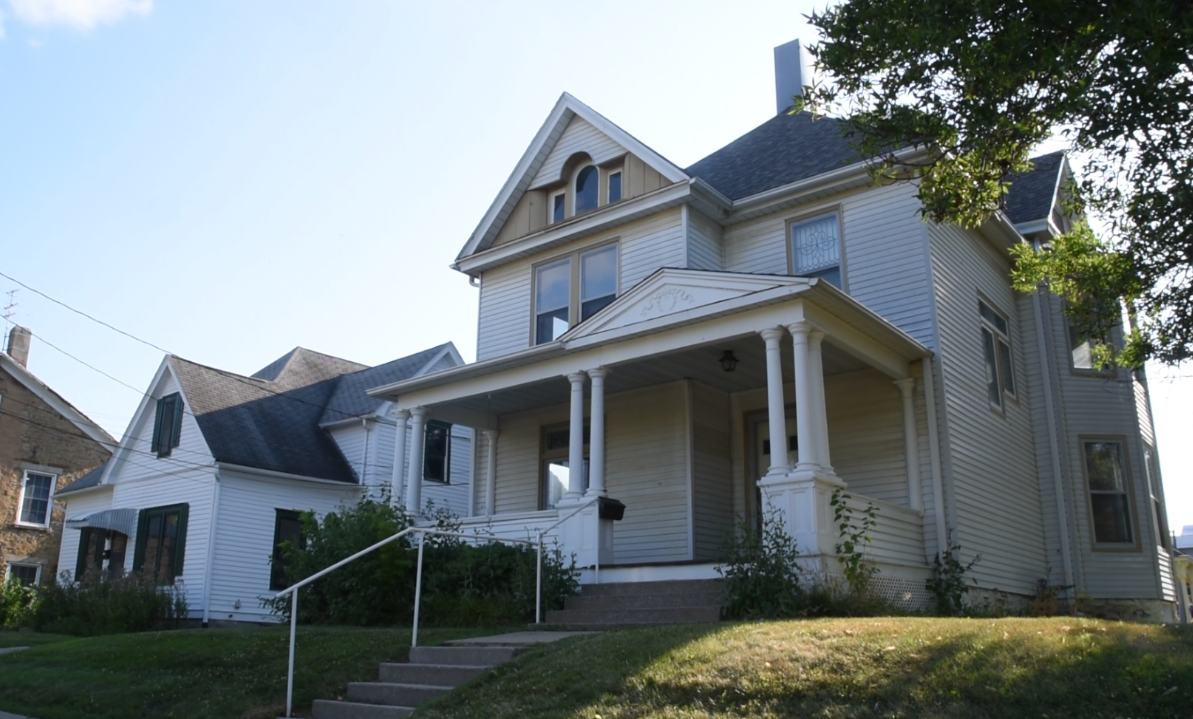 Our Own Space, Expanded Space

“It was clear that the ICPC needed more room to grow with the membership solidly maintaining two dozen plus people for the last couple years, but occupying only 750 sq ft” PS1 Director John Engelbrecht said, “The new home of that program will be the entire house at 225, twice as much space. This expansion will add a classroom to increase workshop sizes and of course, being on street level means more visibility.”

The houses are less than two blocks from PS1’s current location and the organization remains in the Northside neighborhood. 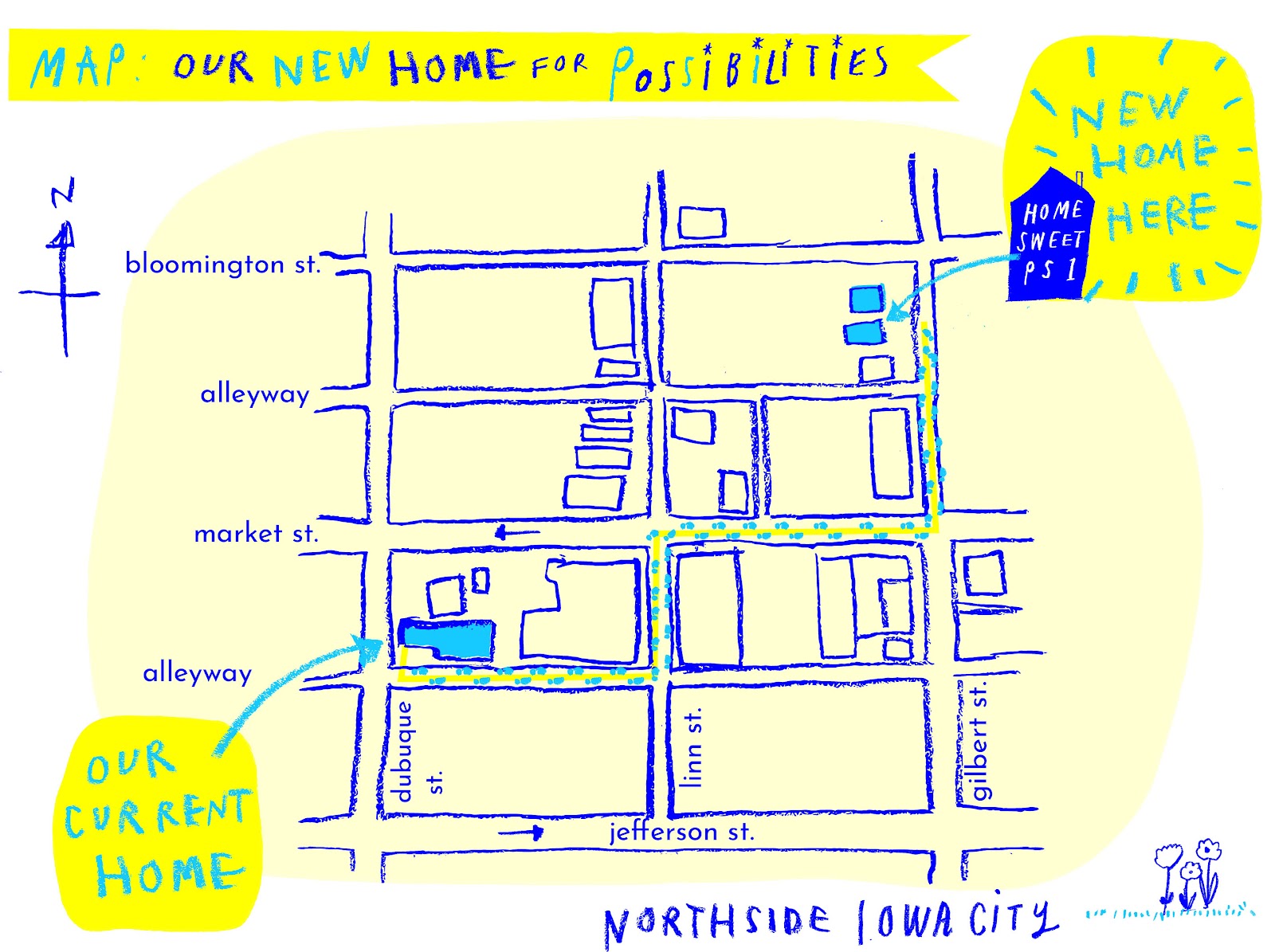 The house on the corner, 229 N Gilbert, will feature a two room gallery/installation space for the organization’s exhibitions and art events to continue. It will also be the home base for The Center for Afrofuturist Studies, holding both a reading room/archive for The CAS as well as a studio for visiting CAS artists. Three other individual studios for local artists will be available in the house.

The Center for Afrofuturist Studies brings artists of color to make and present artwork in Iowa City while engaging with the public and local youth in topics related to the intersection of race, technology, and the diaspora. It is forward looking initiative that imagines bright futures beyond (or from dismantled) systemic white supremacy.

With the properties being adjacent, there is an opportunity to transform the whole corner into a shared common space. While the move to houses allows for more intimate art experiences, this common space will eventually serve as a connecting point and potentially part of the venue. As PS1 Program Director Kalmia Strong states, “there is a lot of potential in the outdoor space between the houses, and we are excited for the future of public art to live and be created on this block.”

The City approved the sale of these houses to Public Space One at the Aug 6th City Council meeting, at which Engelbrecht spoke the following statement:

We are here simply to say thank you.

Thank you to the City of Iowa City for your vision in preserving the properties at 225/229 N Gilbert.

Thank you to the folks from the City for working with us over the last 6+ months to make this a reality. Special thanks to Geoff Fruin, Tracy Hightshoe, Lucy Joseph, David Powers, Stan Laverman, and Tim Hennes, for answering plenty of emails, meeting us at the houses, and sitting through all the meetings that it took to work through this with us. Special thanks to Councilman Teague and Mayor Throgmorton for visiting the space and walking through it while hearing our vision for it. We’re so excited to make this a reality.

Public Space One is an artist-led, community-driven, contemporary art organization. I could talk about what those words mean all day, but I’m going to leave it at this: we’re about possibilities. We create these through our work in the arts, through our platform as an arts organization. We have been in Iowa City 16 years but this will be the first time we’re in a street level, visible space. You don’t know how excited that makes us.

We greatly and humbly appreciate being part of the process to breathe new vibrancy into these spaces and to live in this City which values and invests in art and artists. We look forward to transforming these houses, our organization, and this neighborhood.

The IC City Council approved the purchase 7-0 on Aug 6th. Commenting on the project, Council Cole noted, “It’s a good vibe project, a good vibe organization, and a good vibe future for you… I’m really excited.” Council Thomas added, “The notion of a Home for Possibilities… sort of capped it off for me.” Mayor Throgmorton said, “I’m sure it’s going to be brilliant.”

The closing is set for August 12th and renovations will begin immediately. The plan is to have the corner house (229 N Gilbert) online and active by the end of September, while renovations will be ongoing for most the fall at 225. Tentative plans for opening that house, as the Iowa City Press Co-op, are set for November.

A capital campaign is now underway and a crowdfunding campaign was launched on Sunday, Aug 4th.

Public Space One plans to vacate the Wesley Center in mid-October, though is working to support many of the performance groups like Dreamwell Theatre and Paperback Rhino in remaining in that space for the duration of their 2019-20 seasons and hopefully beyond.

Public Space One (PS1) is a non-profit artist-led organization founded in 2003. PS1 strives to:

• provide an independent, innovative, diverse, and inclusive space for making and presenting art

• operate with an accessible structure that encourages community involvement and collaboration